Are You Looking For a Fast Process Server in Century City CA to Serve Your Legal Documents?

We have been in business over 10 years with a excellent record at serving our client’s documents in a timely manner.  Your legal documents will be served by our professional, registered, bonded and Licensed process servers who have many years of experience. Elite Pro Servers takes pride in each service to build lasting relationships with our clients. Whether you have one service, or you’re a Law Firm that needs many legal services, we value each and every Service.

Having your documents served has never been easier.  Just click on the Request Service button below or call (818) 527-5612 to start:

If You Need a Process Server in Century City CA, We Offer High Quality and Reliable Service at Very Competitive Rates.

Do you need a fast and reliable process server in Century City CA? It is our mission to serve your important documents in the most time and cost effective manner and we are willing to go the extra mile to get it done. We don’t rest until your documents are served. The backbone of Elite Pro Servers is its experienced and honest team of professionals who are registered, bonded, and highly experienced in the ins and outs of process serving as well as other services. We welcome the opportunity to show new clients serving your documents in the most timely and efficient manner possible, We maintain compliance with the latest rules and regulations. We provide routine , rush, and priority service. Process servers with your documents will follow it through to completion and keep you updated throughout the process.

Most Local Basic Process Serving Jobs are $55.00. Stakeouts, messenger and courier are $40.00 Per Hour.

“As a paralegal and a private citizen often needing documents served, I want to give Elite Pro Servers the highest rating. I’ve called on them to get me out of several jams. I remember the gravest of situations where I needed a writ served within 4 hours. Elite Pro Servers located the defendant and completed the Proof of Service in 2 hours. If you want a professional process server in Los Angeles to complete your job, you must use Elite Pro Servers. “They ARE the best in the industry, and they establish THE industry.”

We Make it Very simple to get your documents served with our easy 3-step process:

STEP 1
Just give us some information about the type of documents you would like served and the zip code of the service.  You can give us a call at (818) 527-5612 or fill out our quick form below.

STEP 2
We will review your requested service and give you a very fair price, usually within 1 hour.  If you decide to hire us, you can submit your documents either by fax, email or our online form.

STEP 3
A qualified process server in Century City Ca will serve your documents in the most timely manner possible.  Once the your documents are legally served, we will notify you and supply you with the Proof of Service which you can either file yourself or we can file for you.

Simply click on the Request Service button below and fill out the online form or call (818) 527-5612 to speak to a qualified process server in Century City Ca.

"I had a very difficult situation with a previous client and Kim went above and beyond in taking care of it for me. I've used several different companies but never have I felt the need to post a review. I definitely recommend Elite Pro Servers if you have a situation that needs to be taken care of in a quick and professional manner." 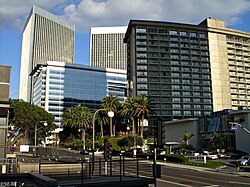 The land of Century City belonged to cowboy actor Tom Mix (1880-1940), who used it as a ranch. It later became a backlot of 20th Century Fox, which still has its headquarters just to the southwest. The area is named for the 20th Century Fox’s Century Property.

In 1956, Spyros Skouras (1893-1971), who served as the President of 20th Century Fox from 1942–62, and his nephew-in-law Edmond Herrscher (died 1983), an attorney sometimes known as “the father of Century City”, decided to repurpose the land for real estate development.The following year, in 1957, they commissioned a master-plan development from Welton Becket Associates, which was unveiled at a major press event on the “western” backlot later that year.

In 1961, after Fox suffered a string of expensive flops, culminating with the financial strain put on the studio by the very expensive production of Cleopatra, the film studio sold about 180 acres (0.73 km2) to developer William Zeckendorf and Aluminum Co. of America, also known as Alcoa, for US$300 million (US$2.4 billion in 2014’s money) Herrscher had encouraged his uncle-in-law to borrow money instead, but once Skouras refused, he was out of the picture.

Much of the shopping center’s architecture and style can be seen in numerous sequences in the 1967 Fox film, A Guide for the Married Man, as well as in a sequence in another Fox film of the same year, Caprice. Century City’s plaza as it appeared in the early 1970s can be viewed in several scenes of still another Fox film, Conquest of the Planet of the Apes (1972).